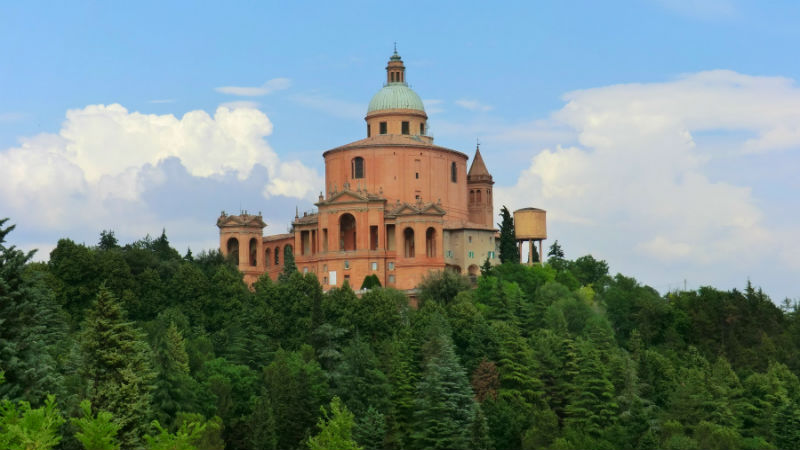 How to get there: climbing by foot takes about 30 minutes from the Meloncello arch, the usual starting point. It is also possible to reach the basilica by car or public transport and private minibus service: cosepuri.

The basilica on the colle della Guardia is one of the symbols of Bologna‘s city. Perhaps the one which the people of Bologna are most fond of, because it is the first to be seen from the ring road and from the railway when returning to the city.

It makes you feel at home.

The founder of the church in honor of Mary was a young woman from the middle-ages, Angelica Bonfantini, who decided to consecrate her life to prayer. She received some land on the colle della Guardia as a gift from her family, and went to Rome in 1193 to meet Pope Celestine III, who handed her a blessed stone to lay at the base of the future basilica.

When Angelica died, in 1244, the monastery and the church were already flourishing and well-established. The present-day baroque building is the result of successive expansions and new constructions, especially during the 18th century under the direction of Dotti.

Inside the basilica, in addition to the small Icon of the Virgin with the Child which, according to the legend, was found in the church of Saint Sofia of Constantinople and bears the inscription “this plate painted by the evangelist Saint Luke must be placed in the church of Saint Luke on the monte della Guardia“, it is possible to admire works by Guercino, Guido Reni and Donato Creti.

To reach the sanctuary of the Blessed Virgin of San Luca you have to walk, if you follow the tradition and go by foot, along a portico that climbs for 3.79 kilometers to the top of the colle della Guardia. 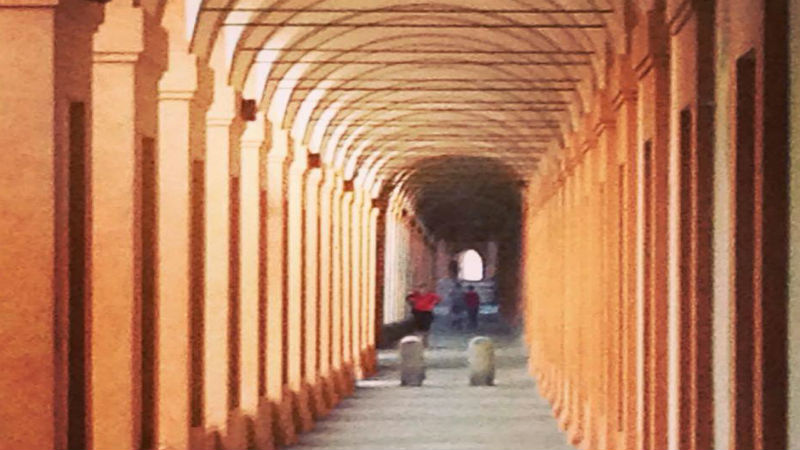 A record portico by extension, it counts 666 arches and fifteen chapels along the route. It is built to protect from the weather from 1674 to 1793 under the guidance of architect Gian Giacomo Monti and Carlo Francesco Dotti . They also worked on the reconstruction of the basilica.

The route starts from via Saragozza, one of the longest streets in Bologna and certainly one of the most beautiful because it exemplifies the philosophy of the porticos, which democratically alternate working-class and bourgeois tracts. Modern and ancient, past and present.

The road, which on the opposite side of the portico exposes the hill with open and green spaces, meets the arch of the Meloncello. This is the point from which the long stretch of portico goes to the basilica of San Luca.

The Arch of Meloncello

The scenic arch is named after a small stream of water flowing nearby, the Meloncello rio, precisely. Built between 1719 and 1732, the vault was designed by the architect Dotti who also worked on the construction of the church and therefore the baroque style of both of them bonds the starting and arrival point of this path.

The arch of the Meloncello is still a reference point for those who start the climb to San Luca on foot or by bicycle.

Interpreters of esoterism greatly indulged on the fact that the 666 arches represent the Devil but all remains to be proved. They certainly recall the obstinacy and commitment of the people of Bologna in the realization of a unique pharaonic work in the world.