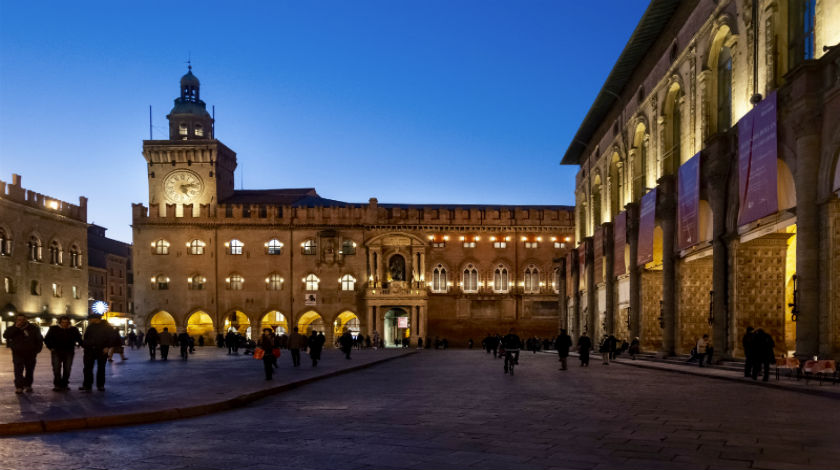 In the past days we presented the welcome information of Bologna.

But as soon as one arrives in Bologna, it is just as important to have a brief historical guide with reference also to the achitecture and the city planning.

The urban history of Bologna has to begin with its geographical position.

The privilege of being away from the mountains and the swamps of the low plain, along with the prensence of two water ways, Reno and Savena, allowed the early settlement of human groups since prehistory.

PREHISTORY AND THE ROMAN PERIOD

The first settlements are found in the Bronze Age, with further development in the plains between the X and the IX century, between the Aposa and the Ravone. The vast inhabited villanovian fully exploits its location to establish commercial relations with Etruria and the Tyrrhenian Sea and towards the Po and the Po Valley.

With the predominance of Etruscans, the city of Felsina, acquires the status of a true Po Valley capital. It establishes trades and artistic and cultural relations with the most important Etruscan cities: Rome, Chiusi and Volterra.

The Celtic occupation of the Boi Gauls breaks the development of the inhabited area, renamed Bona. But resumes even stronger than before with the advent of the Romans who in 189 BC. base their colony in Bononia.

At opposite ends of the city, east and west, two sets of streets departed in a radial pattern and led to the major centres of the area and to destinations further than the Po Valley and the Appennines. These connections confirmed the value of Bologna as an itinerary crossroads.

The eastern part of the city was circumscribed, between antiquity and high middle ages, by robust wall in large blocks of crystalline plaster, called selenite. However, the western portion was abandoned and fell into ruin.

Demographic and economic expansion of Bologna between the X and the XIth centuries led to the opening of two new gates in the walls and then to the construction of a new defensive circuit in the second half of the twelfth century. This was, in the first phase, built as a stockade and embankment, which included the various villages whcih developed in the meantime outside the first circle.

The existence of the Studio was not alien to this considerable development. Law school was born in Bologna at the end of the 11th century (in 1088 according to the conventionally established date) soon became the most famous and esteemed in Europe.

The battles between factions that divinded the Bolognese into pro-imperial and pro-papal favored the construction in the heart of the town of the gentilitial towers. Which gave Bologna the characteristic form of a towered city. The towers, about 80 of which can be counted around the middle of the 13th century, are now just a few (about twenty).

Another peculiar aspect of the medieval city planning of Bologna are the porticos. These are private areas of public law, which were made mandatory for the new buildings of the time and of which almost 38 kilometers remain today in the historic center.

Another important infrastructure that will for centuries distinguish the appearance of urban territory, greatly favoring its economy, was the excavation of the canals Reno and Savena. These were directed inside the walls. The first of the two canals was used to run grain mills and other hydraulic wheels. The second to provide water for crafts of various kinds.

In addition, a branch of the Reno canal, the Cavaticcio, was directed out of the town northward, creating a navigable canal called Navile. This allowed Bologna to be connected with the Po of Primaro, with Ferrara and the Adriatic Sea.

Between the fourteenth and eighteenth centuries there was no new expansion of the city. There was a progressive occupation of areas still free of buildings, which were cultivated as gardens, orchards and vineyards. In addition, some built-up areas were reformed with the replacement of buildings, the creation of squares, the tracing of new roads and the closure of some lanes.

Minimal measures that, however, served to change the appearance of wood and brick of the medieval city, turning it into a renaissance and baroque city.

In regards to urban planning, it should be remembered that at the end of the fifteenth century the city harbor, which was in the medieval times somewhat distant from the town, between gates Galliera and Lame, was moved inside the city. This maneuver gave new impetus to the river navigation, connected to the Po waterway system.

The council started building and expanding the Palazzo Comunale, the palace-fortress headquarters of the city government. At the same time all the families of the city, first of all the Pepoli and the Bentivoglio, erected their prestigious dwellings. These families exercised the mighty noble power in the city for hundreds of years. In particular, with the Bentivoglio, the city opened to art and renaissance culture: from wood architecture to brickwork. More and more frequent was the use of arches and vaults.

In the following centuries, all the senatorial families showed with magnificent palaces the political power they managed together with the Papal Legate.

THE CONSTRUCTION OF THE 16TH CENTURY

In the second half of the 16th century there were important architectural and urbanistic creations. Numerous public buildings and magnificent private residences were built. New scenic squares were also opened.

A major breakthrough was the creation of a single headquarters for the Bolognese Studio, the Archiginnasio Palace. Another intervention was the opening of Piazza del Nettuno with the positioning of the fountain of the same name.

THE CONSTRUCTION OF 17TH CENTURY

In the sixteenth century the great St. Peter’s Cathedral was rebuilt.

The famous portico that connected Porta Saragozza and the Sanctuary of the Blessed Virgin of San Luca was also designed and built at the expense of the citizens. This is at the top of the Colle della Guardia.

The French occupation generated few transformations of urban and architectural character. These include the opening of the Montagnola public garden and the construction of the Certosa suburban cemetery.

THE 18TH AND 19TH CENTURIES

After the unification of Italy, Bologna saw significant transformations, sealing up the renewed political course and the change of the socio-economic fabric of the capital.

Among the major urban achievements are the construction of the railway station and the new direct road (via Indipendenza) connecting it to the city center. There was the expansion of several other central streets (Farini, Saragozza, Garibaldi). Finally, the creation of public squares and gardens (squares Minghetti and Cavour, Giardini Margherita).

However, the great variations in the urban form were not until the end of the nineteenth century. The city’s Regulatory Plan, and external expansion, led to the atrocious demolition of the third wall circle. Some of the city’s gates fell as well as numerous towers. New roads were also opened (via Ugo Bssi and Rizzoli) and some popular building areas such as Bolognina and Cirenaica were created.

During the Second World War, the heavy bombardments greatly damaged the city’s architectural and artistic heritage.

The postwar years were characterized by reconstruction and urban development. New Regulatory Plans were established and put into effect with the enlargement of the city and modernization of the most unhealthy areas.

In particular, the Regulatory Plan of 1969 imposed the conservation of the historic districts of popular housing and their conservative restoration. On the outskirts new extensive neighborhoods of popular construction were created(Barca, Pilastro, Fossolo, Corticella, Beverara and Casteldebole).

In the same year work began on the construction of the trade fair area, entrusted to the Japanese architect Kenzo Tange.

Click here to start the classic tour of Bologna.