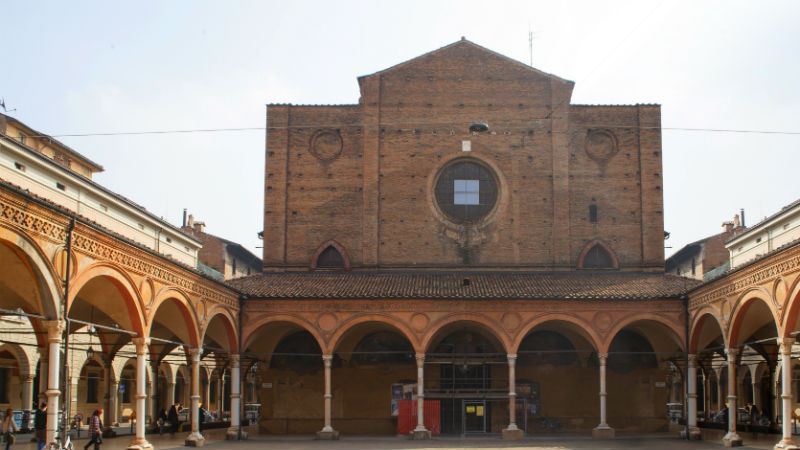 The basilica with Gothic characters and the majestic portico, right at the middle of Strada Maggiore, was designed by the order of the Servants of Mary . It was built in Bologna very slowly: began in 1345, mainly thanks to the intervention of the Servite father and Architect Andrea Manfredi, known as Andrea da Faenza, and completed only in 1545.

The interior holds some masterpieces, the most important of which is the Maestà by Cimabue. It was made around 1285 and donated in the mid 14th century by the Pepoli family to the church. It also holds works by ,Vitale da Bologna Innocenzo da Imola, Alessandro Tiarini, Crespi and Albani.

Also rich in works of art is the sacristy, as well as the adjacent convent where there is the San Carlo Borromeo with two angels. According to the chronicles, it was realized by the “divine” artist Guido Reni in 1613 in only three nights of work under the light of a torch.

The two architectural works, basilica and Portico dei Servi will remind cinephiles of the scene in Pasolini’s Edipo re (1967 Italian film). In this scene the protagonist, an old and blind beggar, walks under the portico in a very wide shot that amplifies space.

For Christmas market visitors it is the place where the traditional fair of Santa Lucia takes place. In reality, until the end of the sixteenth century, the fair was held on the large churchyard in Via Castiglione (now a deconsecrated university hall) devoted to St. Lucia. After the church was closed, the image of the saint was relocated to the basilica of Santa Maria dei Servi and the merchants chose the large portico that runs next to it along Strada Maggiore for the traditional sale of nativity scenes and other Christmas items.

The portico dei Servi is the city’s largest portico in Bologna. Designed by the architect Antonio Vincenzo, it also holds the record of the longest time taken to build. It was started in 1393 and was completed only in 1855 with the construction of the quadrangle-portico in front of the facade.

Today, the Basilica dei Servi is home to an important chapel with a choir . It is about fifty elements that performs in the main liturgical celebrations, especially for Christmas holidays.

Click here to continue to visit bologna in one day