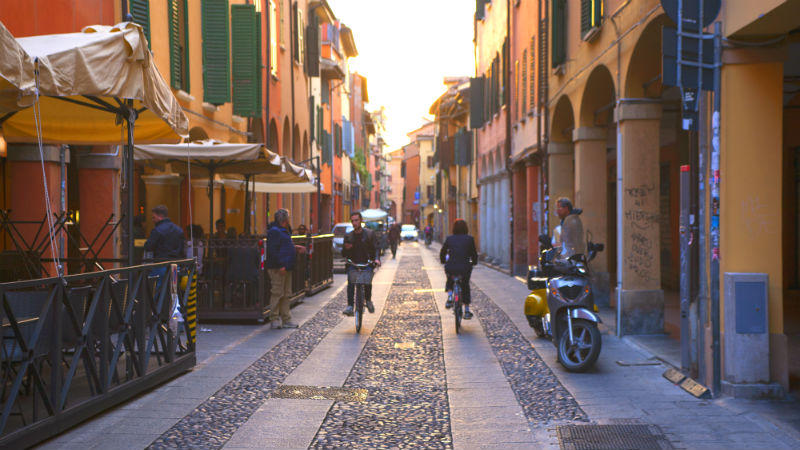 It’s a spirit, a mood more than a street.

Via del Pratello is life on the street. It is a pop enclave (but also rock and reggae and funky …) in the heart of a bourgeois historical center stifled by showrooms and banks. In this area there are no banks, boutiques or anything that can be catalogued in Bologna under the term “fighetto“. At Pratello there are only pubs, places where you can eat something local or multiethnic, and above all, drink. The sharing (of drinks and ideas) is conditio sine qua non to be at ease in this almost pedestrian street, which during the day seems like an old village. But at night it is the reign of students looking for a meeting point, for a chat and a bit of fun.

Via del Pratello is known for being transgressive, something which it boasts about. The road, which was once countryside, as indicated by the local name Pratello and those of the nearby streets, such as Frassinago and via Nosadella (that is trees, respectively ash and walnut), became a popular neighborhood in the twentieth century. It was inhabited and also frequented by immoral characters, chosen by thieves and pimps as the base for their business.

Radio Alice and the cinema club Angelo Azzurro were born in the seventies at Pratello. Then it was the turn of the comedians of the Gran Pavese Varietà in the cultural center Cesare Pavese, the social space in the occupied homes, the street TV, the cinematographic and artistic experiments.

In short, Pratello is now a social street in all respects, it is one of those hyper-places that never sleep.

Curiosity of via del Pratello

In the middle of Via del Pratello, in the former convent of the Franciscan nuns, is housed the juvenile prison. This is the place where once the so-called “naughty” were sent. And what a better place for a place of detention, in Via del Pratello, which was also frequented by shady people with its dark lobbies and steep stairs that made it look like a neighborhood out of the pages of the Mysteries of Paris are by Eùgene Sue.

The building dates back to 1345. But it was rebuilt after a devastating fire in 1393 and only the bell tower now retains the ancient 15th century forms. The convent, which also houses a little church painted in 1760 by Antonio Galli Bibiena, was abolished in 1798 by the Napoleonic edicts. Today, less and less prisoners are in the re-education house and, like the “naughty” of some time ago, it is mainly children with problems and without a guide.