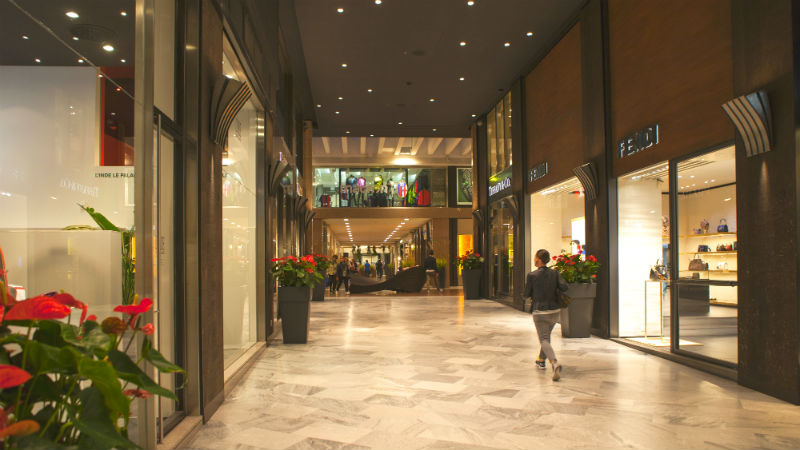 Like Milan, also Bologna has a “fashion quadrilateral“. It has its heart in the Cavour Gallery, a long stretch between Via Farini and the Pavaglione portico. This is another typical non-town location: there are very few homes, several offices, many showrooms and many boutiques of the most renowned brands. The people of Bologna go to look at the shop windows, to see and show themselves. However, for serious shopping, it is tourists that go, especially Japanese, Arabic and Russian, perhaps visiting the city for a fair. But that has not always been the chic area of ​​the city.

By contrast, from the 15th century this was a degraded and malevolent area, a meeting place for the delinquent, in whose alleys opened the most dreary inns besides the most famous brothel in Bologna. During the Second World War heavy damage from the bombing hit the area. And only in the post-war period it was decided to recover it by making it a large shopping gallery. Named after Cavour as the square in front of Via Farini’s entrance, it was inaugurated in 1962, in full economic boom.

Lucio Dalla, a very famous musician and composer from Bologna, lived for a long time when he was young with his mother in an apartment overlooking piazza Cavour. At the time, this was not yet one of the quarters of the fashionable and luxury quadrilateral of the city, but a quiet square with a large central garden frequented by residents of the area.

Piazza Cavour has been dominated since the second half of the nineteenth century by the imposing building with the stern fence out and the beautiful portico of the then Banca Nazionale, now Banca d’Italia. But the central garden retains a little provincial soul that perhaps is what inspired the musicians Lucio Dalla and Ron when they wrote the music for the song Piazza Grande. In Bologna there is no piazza Grande and Piazza Maggiore, with which the song’s often confused, does not have the benches mentioned in the piece. In Piazza Cavour, on the other hand, the benches are there and sometimes they still offer hospitality to the hobos like the protagonist of the song.

It is no coincidence that the association set up in Bologna for helping the homeless is called Piazza Grande.