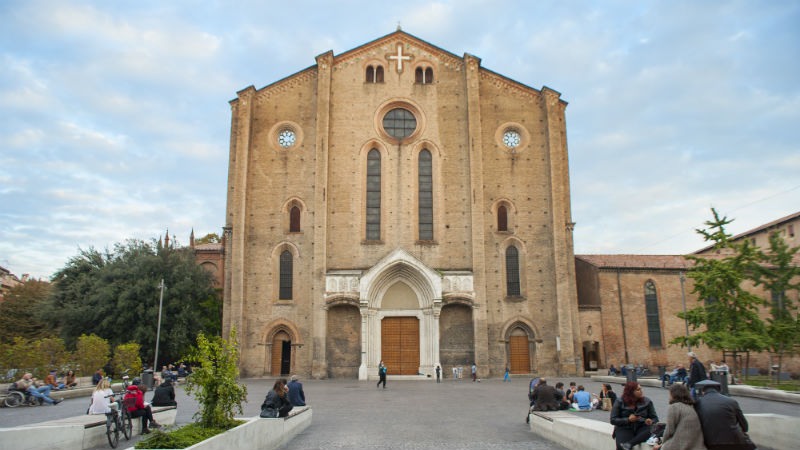 In 1222 in Piazza Maggiore preached a beggar friar named Francesco, who was hosted by other confraternity brothers at the little church of Santa Maria delle Pugliole, in the current via del Porto. Only in 1236, however, the Franciscans, who became numerous and powerful in the city of Bologna, gained an area where they built their own large church.

The Basilica of San Francesco, one of the most beautiful examples of Gothic architecture in northern Italy, was built starting from the apse and ending with the facade in 1263. Deconsecrated and used as a military depot in the Napoleonic era, in 1928 it was restored by Alfonso Rubbiani. But the church suffered serious damage during the bombings that scourged Bologna between the spring and summer of 1943.

The destroyed parts were rebuilt after the war, and was secured after the earthquake that struck Emilia in 2012.

One can admire, among others, the masterpiece of Gothic sculpture by Pier Paolo and Jacobello dalle Masegne. The marble altarpiece of the end of the fourteenth century where the happenings of the life of St. Francis are represented and the figures of the Virgin and of the Eternal Father surrounded by saints and prophets are sculpted.

The sepulchers of the Glossatori

Tourists, who get off the buses in Malpighi Square, are astonished in front of the three majestic sarcophagi that can be noticed behind the gate that surrounds the apse of Saint Francis. They are the tombs of the Glossatori, that is, illustrious professors of the Studio who commented on texts of Roman law with marginal notes for better use by students.

In a university city like Bologna, the famous jurist Accursio and his son Francesco could not have been less worthy of burial, whose sarcophagus, with classical lines, was built around 1293, after the death of the second. Richer and with a double colonnade is the tomb of Odofredo, who died in 1265. While even more ornate and with column-bearing lions is that of Rolandino dè Romanzi of 1284.

The tombs were restored by the architect Alfonso Rubbiani during the eighth centennial of the University.

Under the splendid Gothic facade of the Basilica of San Francesco a square opens, mostly closed to traffic, with a green corner, inviting to rest. Many do so and, depending on the time, they are people walking dogs, moms with children, ladies shopping, elderly people walking, groups of tourists, lovers of the rite of the aperitif out in the open, students who are waiting for their friends, players of more or less improvised instruments, professional late-nighters.

The square thus shows a different face at different hours, days and seasons. On Tuesday morning, for example, it turns into the corner of a Parisian neighborhood on the right shore animated by the flower market. On spring nights the aperitif in the area goes on until night and Piazza San Francesco becomes an essential meeting point. The rite wants everyone sitting on the ground. In the summer, after sunset, only places standing!